Mumbai: Kotak Mahindra Bank Ltd has asked the dedicated bankruptcy court conducting insolvency proceedings against Monnet Ispat and Energy Ltd to include it in the list of “assenting” lenders in favour of the resolution plan submitted offered jointly by JSW Steel Ltd and AION Capital Partners Ltd.

On Tuesday, senior counsel Darius Khambata, representing Kotak Mahindra Bank, said the bank, an unsecured financial lender to Monnet Ispat and Energy, was among the dissenting unsecured financial creditors until now but would now want to be an “assenter”, or part of the lenders who have approved the resolution plan.

“We are an unsecured financial creditor with a claim of around Rs73 crore. However, if we become an ‘assenter’, we may get to recover around Rs3-3.5 crore,” said Khambata. “This will not change anything in the resolution plan that has been submitted since the resolution plan has been passed by about 98% majority approval from the committee of creditors,” he added.

After hearing arguments, the division bench of the National Company Law Tribunal (NCLT) comprising B.S.V. Prakash Kumar and Ravi Kumar Duraisamy directed the bank to file an affidavit in this regard and posted the hearing for 25 April.

The bench observed that any decision on a change in Kotak Mahindra Bank’s status after the 270-day deadline and submission of the plan to NCLT could set a precedent.

“The admitted claims towards Monnet Ispat & Energy are about Rs11,400 crore, while the liquidated value of the company stands at around Rs2,365 crore,” argued Ravi Kadam, senior counsel representing the resolution professional in the matter.

“The lenders stand to take around 75% haircut in the matter,” he added. 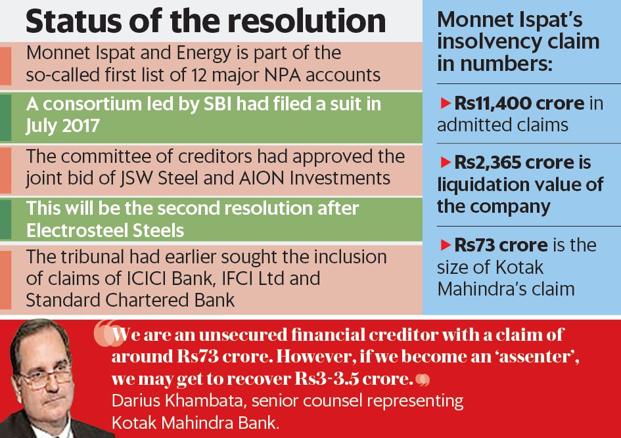 At the beginning of the month, the tribunal had directed the resolution professional of Monnet Ispat and Energy to include the claims of ICICI Bank (Rs486 crore), IFCI Ltd (Rs158 crore) and Standard Chartered Bank (Rs147 crore) in the steelmaker’s bankruptcy proceedings.

Monnet Ispat is part of the first lot of 12 large non-performing loans referred by the Reserve Bank of India (RBI) for early resolution under the Insolvency and Bankruptcy Code (IBC) last year.

A consortium of AION Capital Partners and JSW Steel Ltd has made a binding offer for Monnet Ispat which was approved by the committee of creditors. AION Capital holds a 70% stake in the consortium while JSW Steel holds the rest.

If the plan gets approved by the Mumbai bench of NCLT, this will be the second resolution plan from the so-called first list of RBI. On 17 April, NCLT Kolkata had approved the resolution plan submitted by Vedanta Ltd for Electrosteel Steels.livemint